You are in: Home / Impact Content / Articles / California Returns as Climate Leader, With Help From the White House

California Returns as Climate Leader, With Help From the White House

The Biden administration is restoring the stateʼs power to set its own limits on tailpipe pollution and is largely adopting the stateʼs rules regarding heavy trucks.

WASHINGTON — The Biden administration is preparing strict new limits on pollution from buses, delivery vans, tractor-trailers and other heavy trucks, the first time tailpipe standards have been tightened for the biggest polluters on the road since 2001.

The new federal regulations are drawn from truck pollution rules recently enacted by California and come as the Biden administration is moving to restore that state’s legal authority to set auto emissions limits that are tighter than federal standards, according to two people familiar with the matter, who were not authorized to speak on the record.

The developments represent a revival of California’s influence on the nation’s climate and clean air policies, following four years in which President Donald J. Trump waged legal, political, and, at times, seemingly personal battles with the state. The Trump administration had stripped away California’s authority to institute its own vehicle pollution standards, power that the state had enjoyed for more than 40 years.

Mr. Trump claimed that California’s tougher rules made cars more expensive and less safe.
But now, California is reasserting itself as a leader in policies designed to fight pollution and global warming.

Federal regulators are looking to California for inspiration as they draft new national rules designed to meet President Biden’s pledge that half of all new cars sold in the United States by 2030 will be electric vehicles. Gov. Gavin Newsom, a Democrat, has signed an executive order to phase out the sale of new gasoline-powered cars in California by 2035 and is proposing to spend $37 billion next year to cut greenhouse gas emissions from transportation, buildings and the energy sector.

“We are deeply gratified after years of uncertainty, years of sparring with the previous administration,” said Governor Newsom, speaking of the restoration of his state’s environmental rules.

“We don’t imitate, we’re a model to the world,” Governor Newsom said. “In climate, we want to continue to assert that leadership and continue to raise the bar. Clearly we want to find ways to collaborate with the Biden administration, but I don’t ever want to cede California’s leadership on this goal.”

Governor Newsom said he hoped that as California would set ever more ambitious climate and clean air rules, the federal government would continue to follow. “We want to harmonize again, upward, not downward,” he said.

In contrast to bitter clashes on climate change with Mr. Trump, sometimes via attacks on Twitter, Governor Newsom said he has had productive personal conversations with Mr. Biden on climate policy.

At a campaign event for Governor Newsom in September, the president said: “California, you’ve got to keep Gavin Newsom as governor and send a message to the nation that we have to deal with the climate crisis now. We can’t wait any longer.”

A spokesman for the Environmental Protection Agency, Nick Conger, confirmed that the agency was working on a new rule that “would significantly cut nitrogen dioxide emissions” from trucks, but declined to say if they were modeled after California’s new rule.

“These standards, currently subject to interagency review, will be rooted in the latest science and the law,” Mr. Conger wrote in an email. “As part of any rule-making process, E.P.A.’s proposal will initiate a process to take input from a variety of stakeholders.”

The people familiar with the forthcoming federal rule said it had been significantly shaped by the California rule but that some technical details would most likely differ. 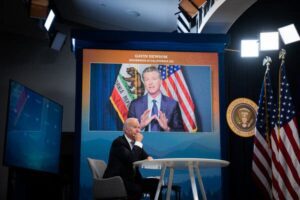 Mr. Trump’s 2019 decision to end California’s authority to set its own limits on auto emissions stood as one of his signature moves to raze climate policies. The regulation of vehicle emissions is central to combating climate change; tailpipes are the largest single source of heat- trapping greenhouse gases produced in the United States.

Under the 1970 Clean Air Act, the E.P.A. had granted California a waiver to set tailpipe standards that were tougher than federal limits in order to combat its smog problems.

As the most populous state, and with the world’s fifth-largest economy, California has been able to influence automobile makers and set the pace for the rest of the country. Seventeen other states and the District of Columbia have adopted the California rules, turning them into de facto national standards. Twelve other states are following California’s mandate to sell only zero-emissions vehicles after 2035.

In 2009, President Barack Obama set federal emissions standards based on the California rule. Last year, the Biden administration began the legal process to restore the California waiver, which is expected to be finalized in the coming weeks.

“This is a historic role that California has played since 1970, a role that was interrupted only during the Trump administration,” said Richard Revesz, a professor of environmental law at New York University. “This is a hugely important policy but it’s also a return to the traditional way of understanding the relationship between the federal government and California with regards to vehicle pollution. It’s a moment of return to normalcy.”

Mr. Trump’s allies see it differently, saying that one state should not be permitted to determine national standards.

“We think that what California is doing is beyond the scope of the law, and we shouldn’t be setting federal law based on what California decides to impose on their citizens,” said Thomas Pyle, the president of the Institute for Energy Research, an organization that supports the use of fossil fuels.

The federal government last updated its truck emissions rule in 2001, when the E.P.A. required commercial trucks to cut emissions of nitrogen dioxide by 95 percent over 10 years. The rule contributed to a 40-percent drop in national nitrogen dioxide emissions, the agency said. 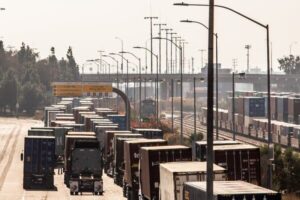 Truckers say that the new rules will be onerous and expensive, with the burden of purchasing expensive new filters and other equipment falling particularly hard on independent drivers.

“From the heavy trucking side, the California rules are as strict and stringent as possible and don’t really account for practical costs of small business truckers,” said Jay Grimes, director of federal affairs for the Owner-Operator Independent Drivers Association, a lobbying group.

It could cost up to $5,000 to update a truck to meet the new standards, Mr. Grimes said.

“It’s coming out of truckers’ pockets,” he said. “They will have to personally invest and they already have small margins. If the federal standards are aligned with the California standards, that’s going to put many small business truckers in a tough spot to keep up.”

Both California and the Biden administration are expected to portray the stricter rules as a way to address the heavy burden of pollution on poor and minority communities, which are frequently near highways and ports. Mr. Biden is the first president to elevate the issue of environmental justice as a core priority, vowing to redress the disproportionate impact of pollution on communities of color.

“Heavy-duty trucks emit the lion’s share of air pollution in California, and that is hitting communities that are already overburdened,” said Craig Segall, a senior official with the California Air Resources Board, who helped write the state’s new truck rule. Mr. Segall said he had spoken frequently with E.P.A. officials as they prepared their new truck rule.

The boom in online shopping during the Covid pandemic has significantly worsened the problem, Mr. Segall said. “There’s an increase in trucking and trucking pollution and that’s what’s motivating this,” he said.

That was echoed by Paul Billings, a vice president of the American Lung Association. “We know that these communities have very high levels of air pollution and trucks are a big chunk of that,” Mr. Billings said. “People who live 500 to 1,000 meters from a major road experience disproportionate harm.”

Mr. Grimes, of the independent truckers group, said that the California rule was so onerous that some truckers may choose to stop driving through the state.

His agency estimates that the economic benefits of the rule — including prevented deaths, illnesses and missed work days — will be $23.4 billion, compared to economic costs to industry of $2.39 billion. That’s a tenfold difference.

The E.P.A. will accept public comments on the proposed truck rule before finalizing it in the next year.

While the new truck rule will focus on reducing pollution of nitrogen dioxide, it is not expected to significantly limit emissions of carbon dioxide, which is driving global warming. However, both California and the federal government are also expected in the coming years to begin work on an even more aggressive truck standard designed to compel an eventual shift to all-electric trucks.

Chiloe Archipielago: a global agricultural patrimony / Why Fog Is So Vital to Life in California / Billions in Climate Deal Funding Could Help Protect U.S. Coastal Cities / How to Live in California in a Disaster Era / Historic, unforgiving Western heat wave is peaking and crushing records