You are in: Home / About us / Press / Chile-California Council Celebrates a Decade of Building Bridges Between Chile, California

The Chile-California Council celebrated a decade of building bridges between Chile and California during the October 19 annual meeting held virtually.

The Chile-California Council (CCC) is a binational nonprofit organization, established in San Francisco with 501(c)(3) status, that promotes mutually beneficial relationships and the exchange of knowledge between Chile and California in the public and private sectors.

The Council’s mission is to promote and coordinate the transfer of knowledge and lessons learned in key development areas in both Chile and California where nature, people, science and technology interact. The areas of action include clean energy, climate change, coastal resilience, nature conservation, impact investment and entrepreneurship, and education and culture.

The geographic, climatic, economic and historical similarities between Chile and California are propitious for a collaboration that result in synergies and mutual benefits for both regions. The Council’s aim is to establish meaningful and long-term relationships to the mutual benefit of both regions and the planet.

The link between Chile and California dates back to the mid-19th century, when the “Gold Rush” created the first loose ties between these trans-hemispheric twins. Since then, a deep relationship has been forged based on collaboration and an exchange of knowledge in various areas to the mutual benefit of both regions.

Chile and California coincide geographically between latitudes 30º and 40º in their respective hemispheres. Both regions have extensive coasts along the Pacific that strongly influence their economies and cultures. Their central coastal areas constitute two of the five ecosystems in the world that have Mediterranean climates, which means that their energy and agricultural potentials are quite similar. 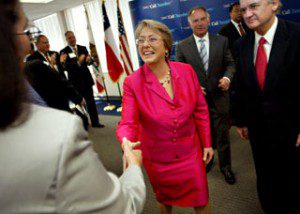 The CCC’s Councilors are a diverse group of leaders from Chile and California, all of them innovate changemakers in their fields of action. The Council is chaired by Rafael Friedmann and includes California and Chilean government officials, academicians, scientists, and private sector representatives, including Paula Estevez, CEO of the American Chamber of Commerce in Chile and Susanne Stirling, vice president of international affairs of the California Chamber of Commerce.

Both California Lt. Governor Eleni Kounalakis and Chilean Undersecretary of the Ministry of Foreign Affairs, Carolina Valdivia addressed and congratulated the Council members. The Council members then held an interactive session to discuss the challenges, opportunities, and steps for cooperation the next decade in the areas of energy, coastal resilience, food, entrepreneurship, and natural disasters.

Since the U.S.-Chile Free Trade Agreement was implemented on January 1, 2004, bilateral trade between Chile and the United States has grown while both trade and investment opportunities abound. The CalChamber is a strong supporter of the agreement.

U.S. foreign direct investment (FDI) in Chile totaled $25.08 billion in 2019, and Chilean FDI into the U.S. totaled $3.43 billion in the same year. This makes Chile the third fastest growing source of FDI in the U.S. in 2019. Chilean FDI supports about 8,3000 jobs in the U.S. Chilean FDI into the U.S. invested $1 million into research. The top industries that received FDI from Chile were food and beverages, financial services, software & IT services, business services, metals, and medical devices (Select USA).