In a First, California Plans to Clean Up Microplastics

The state has adopted a strategy to monitor and reduce the ubiquitous form of pollution. 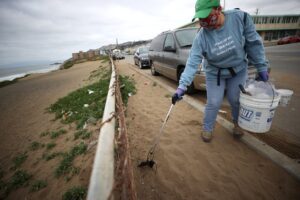 They are in your gut. They are in the ocean. They are even floating through the air in the most remote regions of the West. Microplastics — fragments of broken-down plastic no larger than a fraction of an inch — have become a colossal global problem.

California wants to fix that.

Last month, the state became the first in the nation to adopt a strategy addressing the scourge of tiny detritus. “We need to eliminate our addiction to single-use plastics,” said Mark Gold, the executive director of the Ocean Protection Council, the governmental body that approved the plan.

The strategy is not regulatory, but the council has committed to spending $3 million this year, with reduction targets laid out between now and 2030. Gold added, “You find microplastics everywhere you look.”

By some estimates, humans have manufactured about 8.3 billion metric tons of plastic, only nine percent of which has ever been recycled. About 11 million metric tons of this plastic end up in the ocean every year, and without intervention, this number is expected to triple by 2040, according to the council. When these plastics break down, they can be eaten by marine animals, stunting their growth and causing reproductive problems. They have also been found in human organs, including placentas, as well as in soils and plants.

California’s strategy is part of a global effort to address this problem. Last week, representatives from 175 nations agreed to begin work on a legally binding treaty that would commit them to recycling and cleanup measures, as well as curbs on plastic production. The treaty, supporters say, would be the most important environmental accord since the 2015 Paris Agreement on climate change.

At the local level, California’s strategy primarily aims to do two things: First, prevent plastics from entering the environment. Second, monitor those that are already out there.

The first step, Gold said, is reducing or ultimately eliminating the worst culprits, including single-use plastics, synthetic fabrics, cigarette filters and car tires. Research from 2019 showed that nearly half of the microplastics polluting California’s coastal waters were rubber fragments probably shed from vehicle tires, making them the largest single contributor to the problem.

The strategy also sets goals to improve storm water systems to catch the pollutants before they reach the ocean. “The thing about microplastics is if they get into the ocean environment, they are there to stay,” Gold said.

The plan also commits to monitoring levels of microplastics in California’s waters, just as the state monitors the level of harmful particulate matter in the air, which can often increase during events like wildfires. Such a program would be among the first to consistently monitor these pollutants in the environment.

It also sets goals to research where the majority of the microplastics are coming from, and how much risk each kind poses to the health of humans and aquatic life. Though scientists agree that plastic pollution is a blight, little is known about exactly how it affects us.

“The evidence of harm is not the same as the evidence of presence,” said Britta Denise Hardesty, a principal scientist with the Commonwealth Scientific and Industrial Research Organization, an Australian science agency, and an expert on microplastics, who is not involved in the plan. She added, “It’s awesome that California is doing this.” 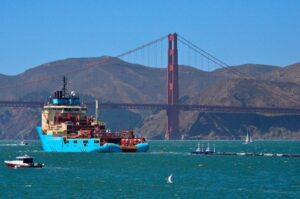 A sensible state strategy, she added, was far more likely to succeed than some previous efforts, including a giant boom that set sail into the Pacific Ocean in September 2018 with plans to remove 150,000 pounds of plastic from the ocean in a year. “You couldn’t design something to be more costly and less likely to succeed,” Hardesty told me.

The hope is that California — the state with the largest economy and among the best environmental protections in the nation — can forge ahead in reducing the harm of microplastics, even if it can’t solve the problem on its own, Gold, the Ocean Protection Council executive, told me.

“We’re California, we lead by example; it’s in our DNA,” he said, adding: “We don’t want to wake up in five years and find out this is absolutely devastating to our marine ecology, and we didn’t do anything.”