You are in: Home / Impact Content / Articles / California Poised to Overtake Germany as World’s No. 4 Economy

California Poised to Overtake Germany as World’s No. 4 Economy

Contrary to popular belief, the Golden State has proven resilient, outperforming its US and global peers. 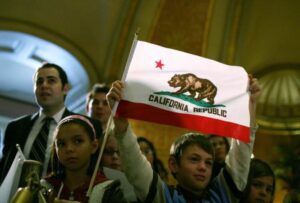 California is gaining in the world’s economy.Photographer: Justin Sullivan/Getty Images
ByMatthew A. Winkler

Gavin Newsom is as familiar as anyone with the media narrative of earthquakes, persistent wildfires, droughts, homelessness and companies fleeing California to Texas for a tax- and regulation-free lifestyle. This is nothing new. California’s governor recalls a 1994 Time Magazine cover story citing “a string of disasters rocks the state to the core, forcing Californians to ponder their fate and the fading luster of its golden dream.”

And yet, “the California dream is still alive and well,” the state’s 40th governor said in a Zoom interview a month before his probable reelection.

He’s not wrong. California’s economy has proven relatively resilient, first through the pandemic and now through the current period of elevated inflation. So much so, that the Golden State’s gross domestic product is poised to overtake Germany’s as the fourth largest in the world after the US, China and Japan. It had already leapfrogged Brazil (No. 7) and France (No. 6) in 2015 and supplanted the UK (No. 5) in 2017. Although many of California’s current figures won’t be published until 2023, estimates suggest the state may have already caught Germany, with at least one forecast implying California is ahead by $72 billion when considering the state’s recent growth rate.

A New No. 4?
California’s economy is poised to overtake Germany after showing steady growth

California’s trajectory is most transparent in the growing divergence between its 379 companies with a market value of at least $1 billion and the 155 publicly-traded firms based in Germany meeting a similar benchmark. Whereas corporate California revenues and market capitalization rose 147% and 117% during the past three years, Germany mustered inferior gains of 41% and 34%, according to data compiled by Bloomberg. The margin of Germany’s nominal GDP of $4.22 trillion over California’s $3.357 trillion last year was the smallest on record and is about to disappear, with Europe’s largest economy barely growing in 2022 and forecast to shrink in 2023.

“All this data continues to belie the dominant narrative and illusion” of California’s “best days being behind us,” Newsom said. “As somebody who’s grown up in California, I feel pride in California’s resilience, leadership, its entrepreneurs, its formula for success that goes back over half a century,” he said, highlighting the state’s “conveyor belt for talent.”

The truth is that California outperforms the US and the rest of world across many industries. That’s especially relevant with renewable energy, the fastest-growing business in California and Germany. The market capitalization of California companies in this business increased 731% the past three years, or 1.74 times more than their German counterparts, according to data compiled by Bloomberg. Notable examples include Fremont-based Enphase Energy Inc., a solar and storage solutions provider, up 916%, or more than twice the 410% returned by wind-farm maker PNE AG in Cuxhaven along Germany’s North Sea coast.

The dichotomy between corporate California and corporate Germany is most pronounced in their top three industries. California technology hardware, media and software saw sales increase 63%, 95% and 115% the past three years, boosting market valuations by 184%, 54% and 58%, data compiled by Bloomberg show. In Germany, health care, consumer discretionary and industrial products were erratic with a 43% increase and declines of 2% and 7% during the same periods. Market values rose a paltry 40%, 8% and 10%.

California’s three-to-one growth advantage is similarly reflected in a comparison of the top 10 companies. Firms led by Google parent Alphabet Inc., Apple Inc. and Visa Inc. will see revenues rise 8% following last year’s 34% increase as they turn $100 of sales into $$49 of profit. They increased their employment by 10%. Germany, led by SAP SE, Deutsche Telekom AG and Siemens AG, will sell 4% more of their products in 2023, down from a 10% increase in 2021, while generating $44 of profit from every $100 of sales. The German workforce declined 2% on average, according to data compiled by Bloomberg. Germany, of course, has been severely impacted by the war in Ukraine.

Still, with just 40 million people, the California economy is punching above its weight on the world stage. Job creation is a particularly strong area, with unemployment falling to 3.9% in July, the lowest since data was compiled in 1976, before rising to 4.1% in August. The gap separating the state from the US national rate of 3.5% is the narrowest since August 2021 and for the first time since 2006, California’s joblessness dipped below Texas (the largest two states for non-farm payrolls). The state’s jobless rate similarly outperformed Germany by almost a percentage point, the most since February 2020, data compiled by Bloomberg show.

Contrary to the prevailing perception of business dysfunction and exodus of people since the start of Covid-19 pandemic, the San Francisco Bay area accounts for 78% of the market capitalization of all publicly-traded companies in California, up from 70% five years ago. San Francisco’s 42 listed companies, which forecasts suggest will see sales growth of 14% in 2023 and 2024, are 62% more numerous today than at the end of 2018 when London Breed became the first black woman and 45th mayor of the city. Oakland, home to the third-largest port in the state and eighth-largest in the US, has grown at a faster monthly rate (9.9%) than No. 1 Los Angeles (0.3%) and No. 2 Long Beach (8.7%) since 2015 when Libby Schaaf became the city’s 50th mayor.

“There’s a reason why people continue to do business here,” Breed said in a City Hall interview with Bloomberg News earlier this month. “It’s because of the talent.” Breed also said that she’s hearing of people who are moving back to the Bay area. “A lot of the same people” who decided “to leave don’t want to stay in areas where they don’t feel there’s a community, culture — that’s what San Francisco brings to the table.”

Schaaf, who grew up in Oakland and completes her second term in January, agrees. “We value innovation but we also value diversity and equity,” she told Bloomberg News in an interview in her City Hall office earlier this month. “It’s nice to see those values are economically rewarded because California was very much lambasted” during the Trump administration.