You are in: Home / Impact Content / Articles / Why Fog Is So Vital to Life in California

Why Fog Is So Vital to Life in California

Some scientists are concerned that San Francisco’s most iconic meteorological phenomenon is on its way out.

It’s Thursday. Why fog is so vital to life in California. Plus, new research shows that worsening smoke from wildfires may have reversed decades of improvements in Western air quality. 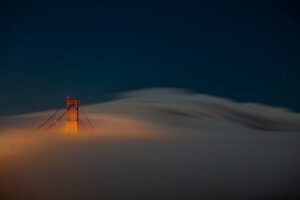 Nina Riggio for The New York Times||Coastal fog isn’t unique to the California coast, but few places in the world are so deeply linked with the ghostly meteorological phenomenon. Even the 🌫 shows what appears to be the Golden Gate Bridge shrouded in clouds.

My colleague John Branch and concerns that it may be fading as the world warms. A reduction in fog could harm California’s agriculture industry and its oldest trees, and could change the identity of the Bay Area.

John spoke to me about his article from his home about 20 miles north of the Golden Gate Bridge, which he believes may be “the most famous foggy place on the planet.” We talked about why he wanted to report on fog, the role it plays in California’s ecology and what he believes is San Francisco’s soundtrack of the summer. Here’s our conversation, lightly edited for clarity:

Soumya: How did you come to this story? Why focus on fog?

John: I have a strange infatuation with the fog. I find it mystical and fascinating. It’s such a life force around here in ways that I think people don’t realize. And it’s beautiful, too. I love foggy days. I love driving around or running around and seeing the fog blowing over the hills or through the Golden Gate.

I have a lot of friends here who grew up in the Bay Area who certainly believe that fog is disappearing. That’s anecdotal, but there have been some studies that have suggested as much. Between my fascination with fog and the idea that fog could be disappearing, I wanted to try to tell that story and dive into why that would even matter.

Soumya: You write that it’s hard to quantify fog, and therefore difficult to know for certain if fog is decreasing. But if it is, how would that affect California’s agricultural areas?

John: Without the fog, presumably the temperatures warm and you have more direct sunlight. That would really change, for example, the kinds of varieties of grapes you would have. For people who spend time in Sonoma or Napa Valleys, they might know that close to the Bay is a certain kind of grape that is accustomed to cooler temperatures and foggy, less sunny climates. And the farther north you go tends to be thicker-skin grapes better for hotter, drier weather. So without fog, it would completely alter that.

And the same thing happens down in the Salinas Valley. Not with grapes, but would you be growing strawberries if it wasn’t foggy and cool? Probably not.

Soumya: I was surprised to learn that the coastal redwoods, the world’s tallest trees, get a third of their water supply from fog. What role does fog play in California’s ecosystems?

John: In the Bay Area, we go, for the most part, from the first of May to about the first of October, often with zero rain. Fog is the thing that bridges the gap between the rainy seasons, and feeds and nourishes the redwoods. Not only does it do that, but that water that drips off the redwoods feeds everything from lichens to mosses to newts and salamanders to salmon. It’s why the streams in the hills around here don’t entirely dry up in the summer and allow for salmon to not completely die off. To lose fog and lose that and to lose redwoods, potentially, is really frightening.

Soumya: You write about real estate agents in San Francisco becoming fog experts because it’s such a defining factor for neighborhoods in the city. What role does fog play in the microclimates S.F. is famous for?

John: Within San Francisco, which is a tiny city geographically, people still know which are foggy neighborhoods and which ones are not. The differences between one neighborhood that might be socked in by fog for much of July and August is huge compared to a different neighborhood that might be two miles away and, simply because it’s over the top of a hill, it’s known to be sunny most of the time of the year. The reason SFO is where it is is because it’s the least foggy part of the peninsula. It’s not on the coast like LAX because it would be foggy all the time. So the way the city is built, in some ways, is due to fog.

Soumya: As part of your reporting, you toured the Golden Gate Bridge’s five foghorns, which typically aren’t open to the public. Why did you want to visit and write about them?

John: You think about fog as this kind of visceral thing: It cools our temperatures. It’s really beautiful to look at. But what it also does is present the need for foghorns. And for a lot of people around here the foghorns are the soundtrack of summer.

They will be shopping down Chestnut Street or they’ll be sitting on their balcony somewhere in the Mission and they can hear foghorns coming all the way from the Bay somewhere or from near the Golden Gate Bridge. And it’s just this backdrop. The way some people might have crickets at night, they have foghorns, and I just love that. I think there’d be something missing if suddenly we didn’t have fog and had no need for foghorns.