California’s inland and valley regions are seeing unprecedented September temperatures over 110 degrees, while the state’s power grid is near the brink 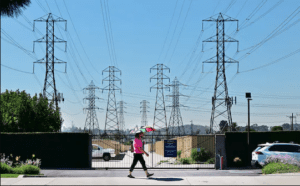 A pedestrian uses an umbrella as a shield from the sun while walking past power lines in Rosemead, Calif., on Aug. 31. (Frederic J. Brown/AFP/Getty Images)

A historically severe September heat wave is baking the West, breaking hundreds of records, posing a danger to public health and pushing California’s power grid to the limit. Some records have been shattered by wide margins as the scorching air mass exacerbates the fire danger in the drought-stricken region.

Nearly three hours after the alert was issued, California ISO said it was ending the alert after stability had been maintained, in large part due to consumers conserving power. The operator said it had not needed to cut power to any customers during the alert.

The ISO urged residents to “precool” their homes to 72 degrees Tuesday and Wednesday mornings, and then turn the thermostat to 78 degrees during peak demand hours between 5 p.m. and 9 p.m. It has called for such reductions on seven straight days.

The heat taxing the state’s power grid is historic for both its duration and intensity, evidenced by the continued toppling of long-standing monthly and all-time records.

“This will be essentially the worst September heat wave on record, certainly in Northern California and arguably for the state overall,” said Daniel Swain, a climate scientist at UCLA, in a Twitter Spaces discussion Tuesday. “By some metrics, it might be one of the worst heat waves on record, period, in any month, given its duration and its extreme magnitude, especially in Northern California and especially in the Sacramento region.”

Forty-two million Americans are under excessive heat warnings, including across most of California, northeast Arizona and adjacent southern Nevada. The Great Basin, southern Idaho and western Utah are under heat advisories.

“Extreme heat will significantly increase the potential for heat-related illnesses, particularly for those working or participating in outdoor activities,” wrote the National Weather Service. “[There is a] very high risk of heat stress or illness for the entire population.” 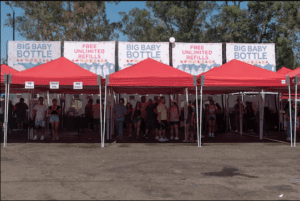 People cool off under tents equipped with misters during a heat wave in Sacramento on Sept. 4. (Laure Andrillon/Reuters)

The excessive heat is also fueling the risk of fast-moving fires.

Red-flag warnings — connoting dangerous fire weather — encapsulate the entirety of Montana in addition to northern Idaho, much of Oregon, and northern and eastern Washington.

A number of large wildfires have erupted over the past week in California, Oregon, Idaho and Montana. The fast-moving Mill Fire, which erupted Friday in Northern California, killed two people and injured three. On Monday, two people died and another was injured by the Fairview Fire, which started near the city of Hemet, which is about 75 miles southeast of Los Angeles in Riverside County.

In Southern California’s San Bernardino County, Big Bear Mountain ski resort was using water from snowmakers to hold back the Radford Fire, which had grown to 450 acres.

The National Interagency Fire Center elevated the need for national fire preparedness to Level 4 out of 5 because of hot, dry and windy conditions predicted for the foreseeable future. 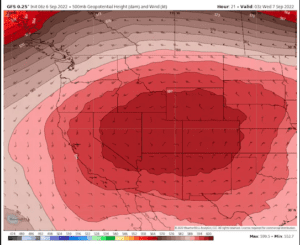 The instigating heat dome across the western United States. (WeatherBell)

The heat, which reached a blistering crescendo Tuesday, will remain at extreme levels through Thursday as a stagnant high pressure “heat dome” crests overhead.

“[D]angerous heat will likely persist through the end of the week,” wrote the Weather Service office in Sacramento on Tuesday. 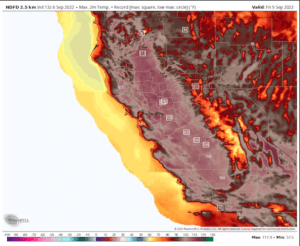 The National Weather Service’s forecast for highs each day through Friday; boxes represent where records are likely to be tied or broken. (WeatherBell)

The heat traces the spine of California down to the Bay Area and Southern California too.

Los Angeles will spend the next few days in the mid- to upper 80s, but the temperature should peak around 90 degrees on Friday. Keep in mind that estimate is at the airport, though — just a few miles inland, highs will hover around 100 to 105 degrees.
Death Valley, Calif., has hit at least 124 degrees four times in the past six days and is expected to top 120 degrees through Thursday.

The heat has been spilling east too, bringing toasty weather to Denver, with record highs in the upper 90s to near 100 projected through Thursday. Salt Lake City — which soared Tuesday afternoon to a September record of 105 degrees — will continue to hover in the low 100s.

Predicted temperature difference from normal over the western United States on Wednesday by the National Weather Service. (WeatherBell)

When will the heat ease?

The heat will begin to gradually ease after Thursday. Temperatures closer to average will return to much of California over the weekend, although temperatures will remain somewhat above normal over the Pacific Northwest and Northern Rockies.

Around that time, moisture from Hurricane Kay in the Pacific southwest of the Baja Peninsula could begin wafting northward, lowering temperatures and possibly bringing some beneficial rainfall to Southern California and even farther north. However, its specific effects on the region are highly uncertain and it could also increase the potential for dry lightning that could increase the fire risk.
Climate change connection

While extreme heat events are not caused by climate change, human influence on our atmosphere is making them more frequent, intense, prolonged and, in some cases, larger. It propels already high-end events into record territory.

Breaking records by large margins, the heat wave bears shades of the unprecedented events that torched the Pacific Northwest in June of 2021 and Britain in July, both of which scientists concluded would have been virtually impossible without human-caused climate change.

Stateside, over the past week, more than 1,141 warm-weather records have been set in the United States compared with just 36 cold records. If climate change wasn’t a factor, these extremes would roughly balance out.

From California to Montana, hundreds of heat records have been set since Aug. 30, and dozens more are in jeopardy over the coming days.

In addition to calendar-day records, multiple locations have set monthly records and even all-time records (the warmest temperature observed in any month). We highlight some of the of most significant here:

Chiloe Archipielago: a global agricultural patrimony / Why Fog Is So Vital to Life in California / Billions in Climate Deal Funding Could Help Protect U.S. Coastal Cities / How to Live in California in a Disaster Era