You are in: Home / Impact Content / Conferences / Agriculture in a Changing world

Agriculture in a Changing world

Reversing a common crisis through science, technology, innovation and public policy
• Forest fires, droughts and historic temperatures. An undeniable climate change has begun to impact production, the economy and people in the agricultural and food sectors.
• Exchanging experiences between both nations in an effort to find ways to mitigate and adapt to these changes, and to create new work styles for communities.

Chile and California have a lot in common despite being in different hemispheres. A lengthy coastline along the Pacific Ocean, fertile central valleys and
a mountain chain where the snow irrigates prairies and crops in the spring. But they also share years
of intense drought, unusually great forest fires, continuing to farm and raise livestock in ways that are not very environmentally friendly, and the same challenge of implanting political and cultural changes and transforming food production practices to survive in a new scenario of change.

To debate the actual problems and, above all, to share experiences, the Chile-California Council (“CCC”), the UC Davis Chile Life Sciences Innovation Center (“UC Davis Chile”), the Catholic University’s Center for Global Change and the Agricultural

and Livestock Research Institute of the Ministry of Agriculture of Chile (“INIA”) organized a seminar
in the Tánica Auditorium in Santiago that was attended by specialists from the above academic institutions, government officials, entrepreneurs and businesspeople in the farming and food sectors. The goal was to see how climate change must be addressed given the planet’s current conditions and

the direct relationship this has to those sectors. The seminar was sponsored by COP25, the Ministry
of Foreign Relations of Chile, AmCham Chile and InvestChile. MundoAgro was the main media partner.

The objective of this seminar was to assess the situation analysis of the climate change scenario that the planet is facing, and the measures that have been adopted in Chile and in California, particularly in the agriculture and food production sectors, to mitigate, adapt to and look towards a future where the need to renovate regulations and make advancements in forms of production and consumption is inevitable. One of the main factors already being seen: a shortage of water. Glaciers in the central zone are melting fast; there is no snow in the mountains; and there is an overexploitation and depletion of water tables.

“In some zones, there has been a drop of 7 to 8 meters per year in the groundwater levels, which causes land to sink from 10 to 25 centimeters per year,” explained Samuel Sandoval, a specialist at
the UC Davis Department of Land, Air and Water Resources by video conference call. “Imagine buying a house that sinks 10 to 25 centimeters each year because of the overexploitation of aquifers.”

Like in the central zone in Chile, the increase in temperatures in California has been notorious and it has started to change the Mediterranean climate that was traditionally good for the wine industry, just like in Chile.

—“For example, Napa Valley spent 50 years convincing people that it was the ideal place for Cabernet Sauvignon to compete against Bordeaux. So, the price of grapes is very high, 10 times higher than in the Central Valley of California,” said
Daniel Sumner, a professor at the Department of Agricultural and Resource Economics of UC Davis. “It may be necessary to change to other varieties because of the temperature increase, and the reputation that the valley forged will have to be recreated. It is a potentially expensive change. The climate has changed in the last 50 years and we have seen how the prices of wines in some specific appellations of origin–there are 20 thousand prices– have varied in response to the warming.”

The immediate issue in the situation analysis of Chile is the shortage of irrigation water, due to the

drought, to the depletion of the water tables and to misuse. According to Oscar Cristi, General Water Director, “we are not sufficiently prepared for this transition from abundance to a growing shortage, in terms of management, technology and the regulatory framework. In fact, at this time there is a limitation on the use of 47% of the 375 aquifer sectors in the country. In 70 of those zones the use of groundwater is ‘restricted’ and next year they will probably be moved to the category of ‘prohibited.’”

Francisco Meza, a Professor at the School of Agronomics and Forest Engineering of the Catholic University, also raised one of the problems looming in Chile in addition to water, which is how to confront the growing demand for energy in the agricultural sector. Commenting on the water situation, he said:

—“You have to be careful with the issue of water: The water flowing out of rivers is not lost in the sea. The river needs that water for the ecosystem services that it provides along its channel as the water flows downstream, and the ocean needs that water from the rivers because it contains minerals important to its biodiversity. Drying up the rivers may prove to be very serious; a major issue. It would be good to return part of the catchwater to many completely dry rivers in Chile. The issue of significantly improving irrigation efficiency in Chile is pending, which is still around

40%, a very low percentage.”
Meza then added that: “There are other difficulties
in the area of energy, such as the lack of incentives
to reduce or capture carbon emissions. Nor are there any taxes on greenhouse gas emissions which, if they existed, would generate additional costs for farming, such as packing and freight. The question is, do
we have room to connect to renewable energy and transform farming so that it depends more on solar, wind and unconventional renewable sources?”

Ideas and experiences under way

Apart from the decisions that depend on the political and business world, this Chile-California seminar was useful in showing how solutions and innovations are being developed in both countries.

Matias Sjögren, co-founder of BioFiltro, explained how his system for processing liquid waste using worms removes nitrogen from excretions, supplies water good for irrigation, and reduces methane gas emissions from the waste treatment lagoons of the livestock industry by 90%.

Pia Walker, Head of Corporate Sustainability at Hortifrut, currently the largest berry producer in
the world, announced that in October, Hortifrut will complete the installation of solar power plants on 10 of its properties in Chile, which will avoid the release of more than 700 tons of carbon dioxide (CO2) into the environment.

Sebastian Cantuarias, Executive Director of Fundación Dinero y Conciencia (Money and Awareness Foundation), who is part of the process to implant ethical banking in Chile and Latin America, discussed social aspects of climate change that

the Foundation is interested in addressing through peer-to-peer lending, which matches investors with companies:

—“What we are funding are projects to transform pesticide-intensive farming, a large consumer of water and energy, into an organic, biodynamic farming where not only will land be recovered and climate change will be faced, but also where human

dignity is put at the core of the climate change issue. Farming will be thinking about the food that we are leaving to our children.”

Despite the critical situation of water and land,
California is one of the few places where greenhouse
gas emissions have not only been lowered by 40%–
CO2, methane and nitrogen by- products–but where
the 2020 reduction goal was also reached two years
early. One of the projects that helped is the Large
Dairy Farm Digester Program that provides financial
aid to producers to install tanks to process cow 46 manure and extract methane gas.

—By a videoconference call, Benjamin Houlton, a specialist of the Department of Land, Air and Water Resources at UC Davis in California, said “The key challenge in the 21st Century is really how to keep gas emissions negative while we feed people, protect agriculture, the economy and the planet. It is not going to be an easy challenge. I believe that there will be many innovations from California and I know that our partnership with Chile will help its innovations reach California. The interesting thing about farming is that it is the only sector of the economy capable

Yet the challenges not only lie in improving air quality but also land quality. One of the alternatives in Chile is “regenerative animal farming.” Rafael Larraín, a specialist in the Assessment of Animal Farming Emissions and Mitigation Options at the Catholic

University of Chile, explained that the system involves scheduling pasture lands to allow zones to grow shoots–also thanks to the organic waste the animals themselves leave behind–before returning the livestock to one same zone where there is no aftergrowth.

— This researcher said: “When we permanently grow annual crops, we are moving towards a land mining model: we extract the nutrients from that land, but
it is not recovering, so we are losing the quality of that land. This limits our future sustainability, above all considering the millions of people that we have

Cristian Sjögren, co-founder of AgroUrbana, displayed the achievements of the first vertical agricultural company that was set up in Chile and Latin America in the spirit of looking for formulas
to “significantly increase the capacity to produce food in urban zones. On the outskirts of Santiago, baby lettuce, kale, chard, arugula and watercress are grown under artificial light and other technologies in a 300-square-meter enclosed compound that yields the equivalent to 3 hectares of fields. And adds value for small farmers.

—“The new generations do not want to dedicate themselves to what is virtually subsistence farming. They do not want to do heavy manual labor under extreme conditions. Instead, they prefer to be closer to technology. We believe that vertical farming may

be a part of the solution.”

Yet for Francisco Meza, professor at the School of Agronomics and Forest Engineering of the Catholic University, the most imminent and urgent challenge is not what is done in the future but rather “trying
to talk about climate change and farming after the COP25 conference. Right now, everyone has ‘COP fever’ and is enthralled! And the greatest temptation that we will have is to say, in 2020, Ok, what’s

up because of the COP, but going forward, there needs to be greater degree of national involvement in funding these committees and scientific development. Nearly all the projects under way on this subject are receiving funding from abroad, and that must change urgently in the short term.” 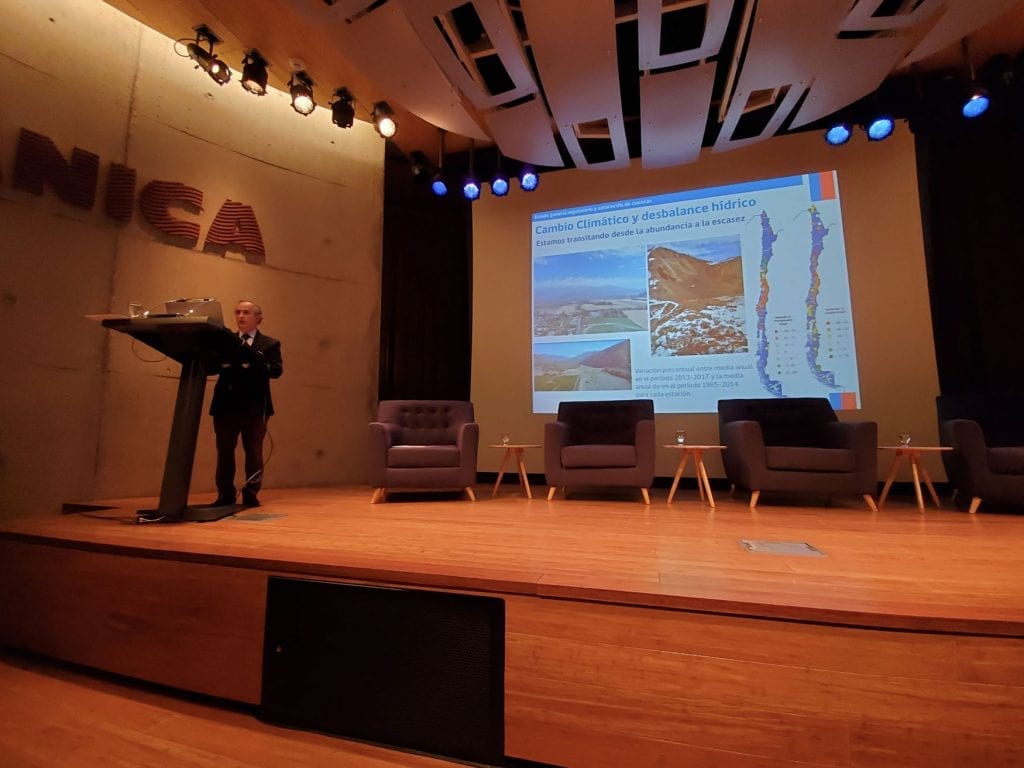 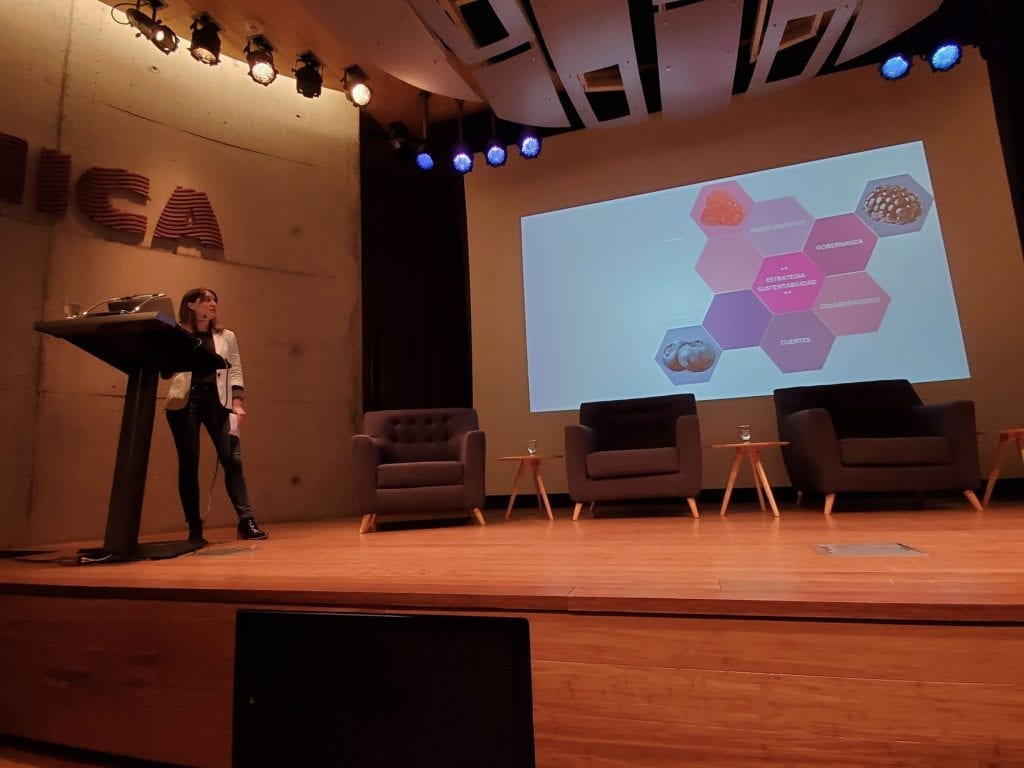 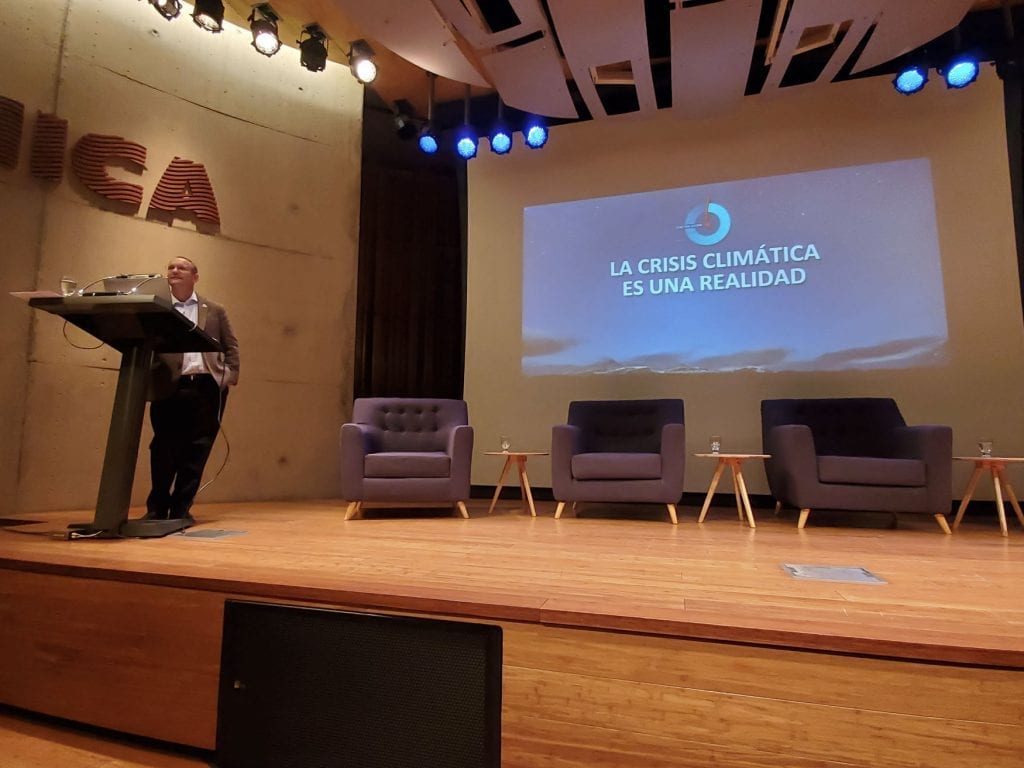 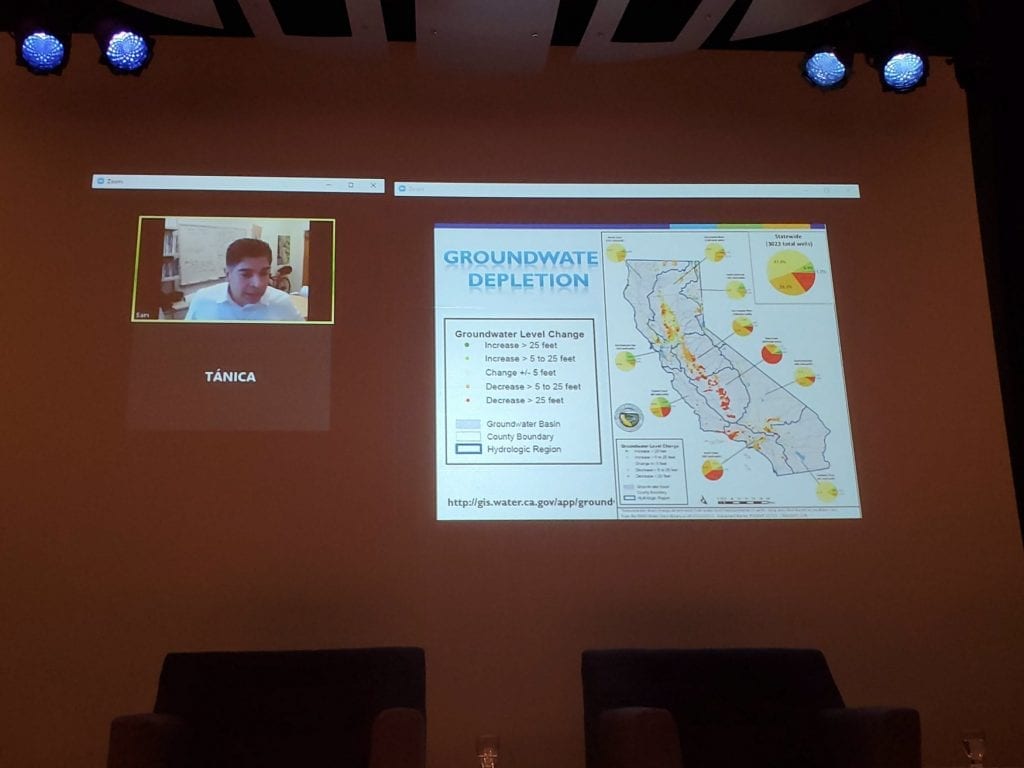 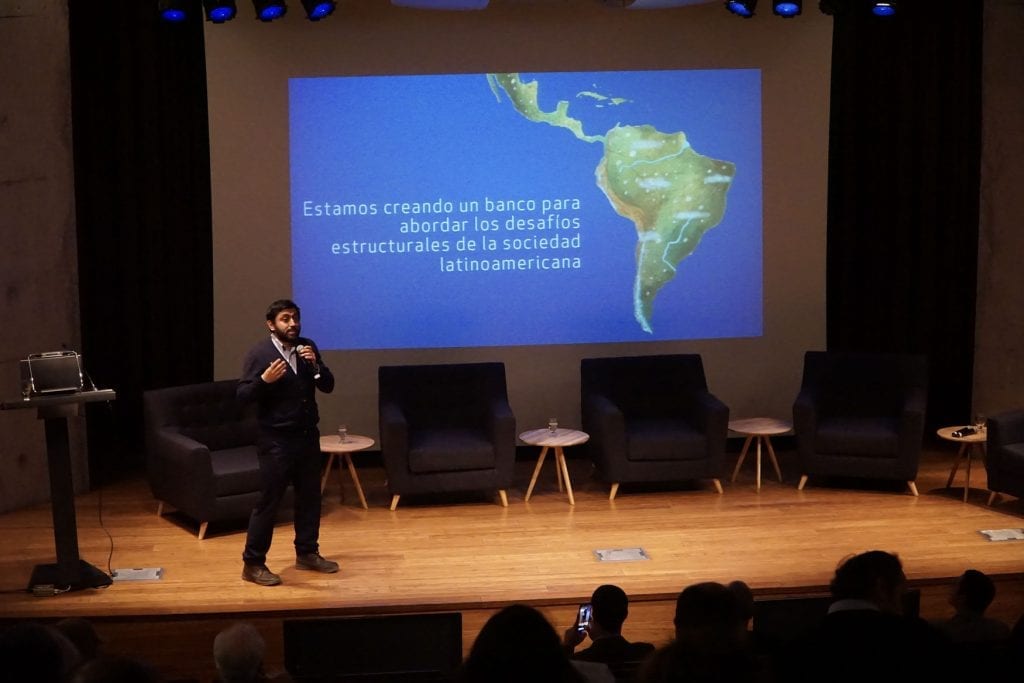 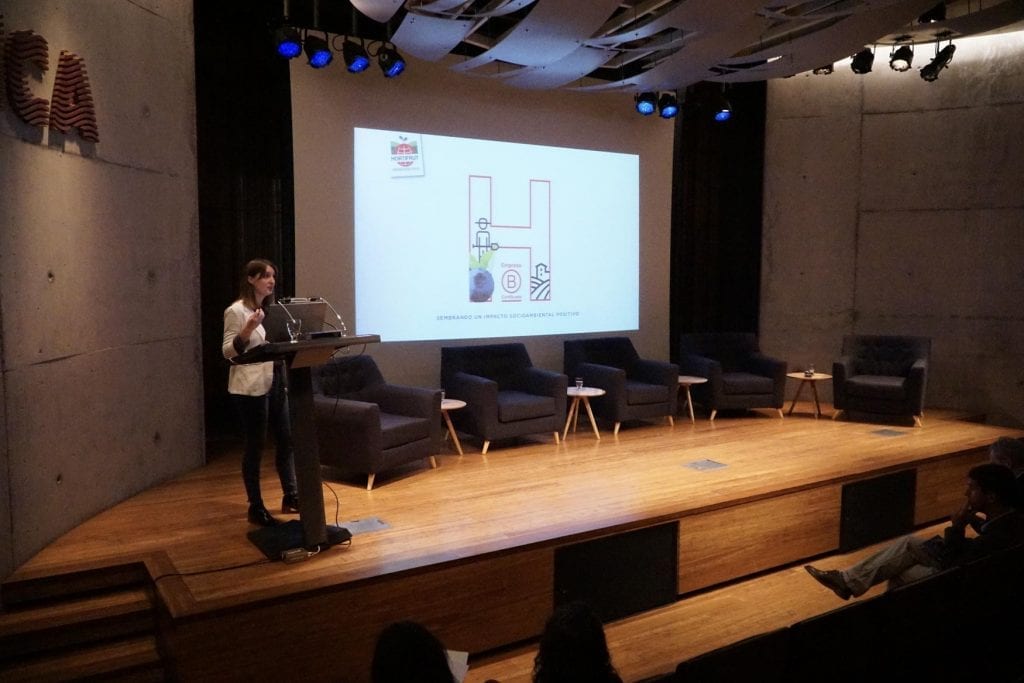 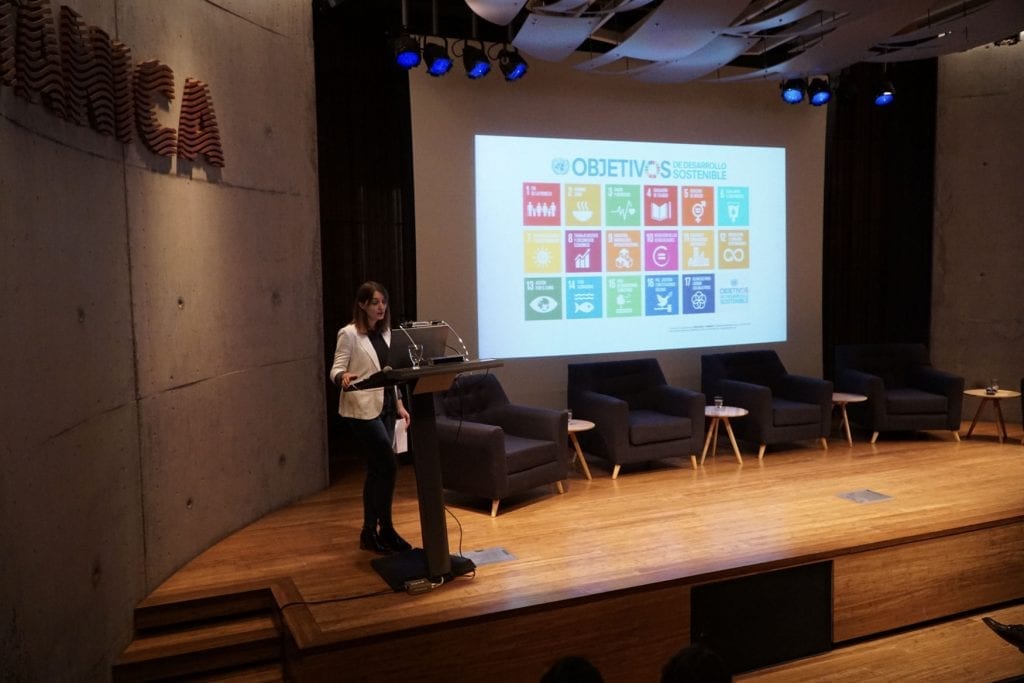 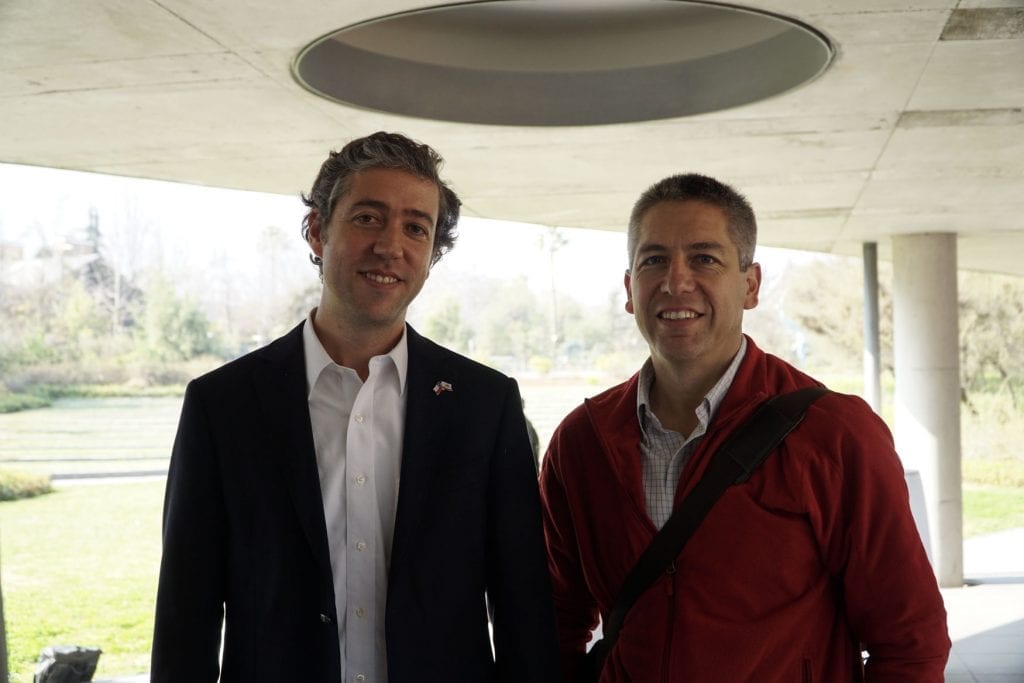 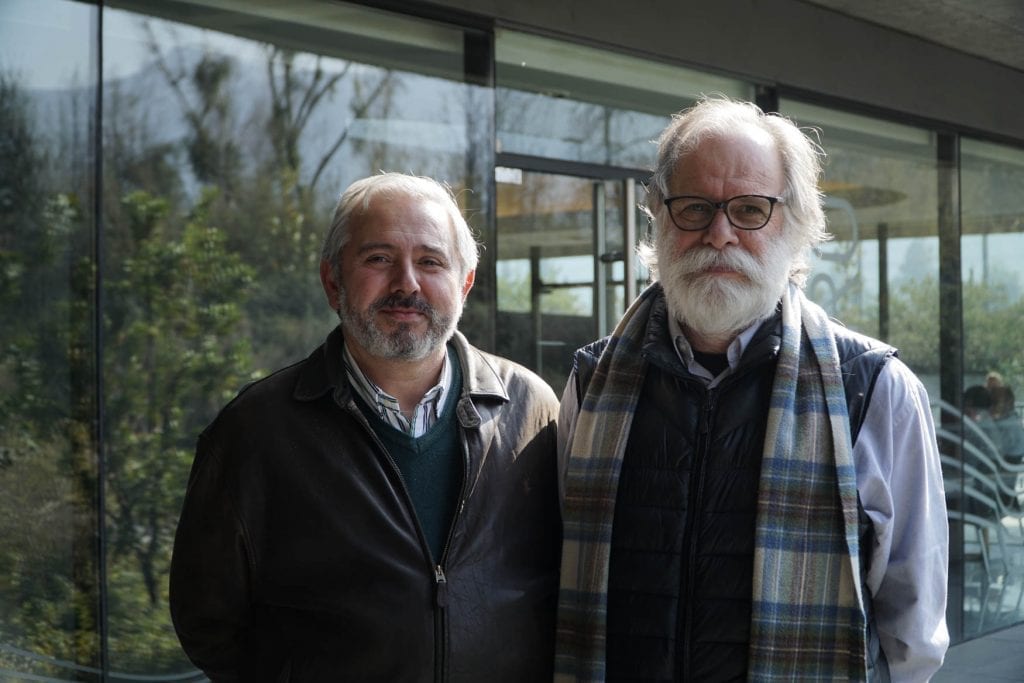 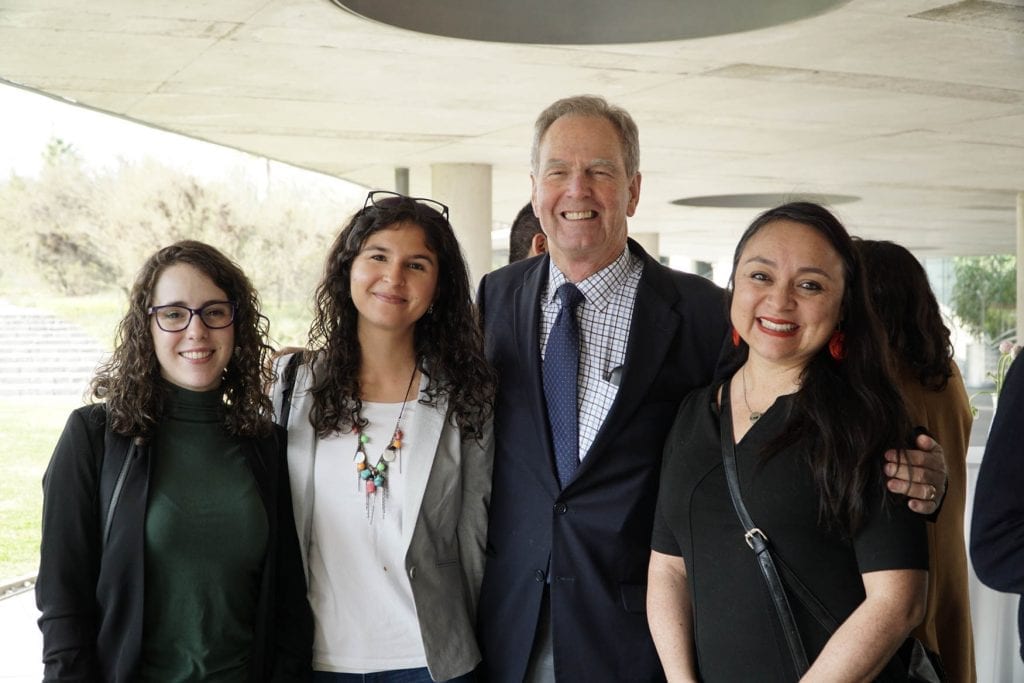 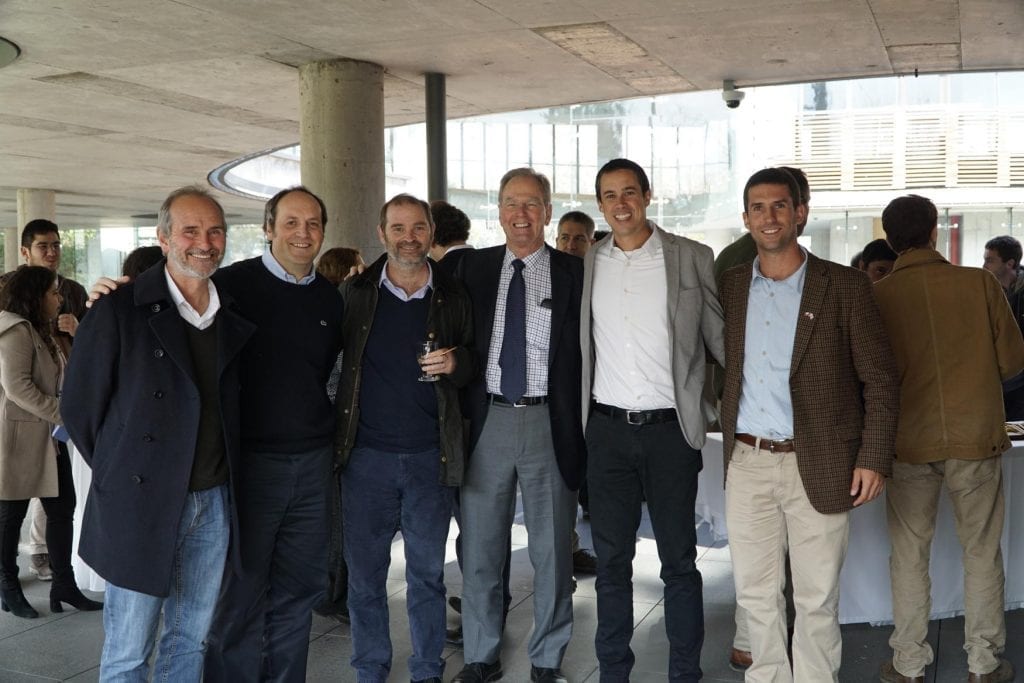 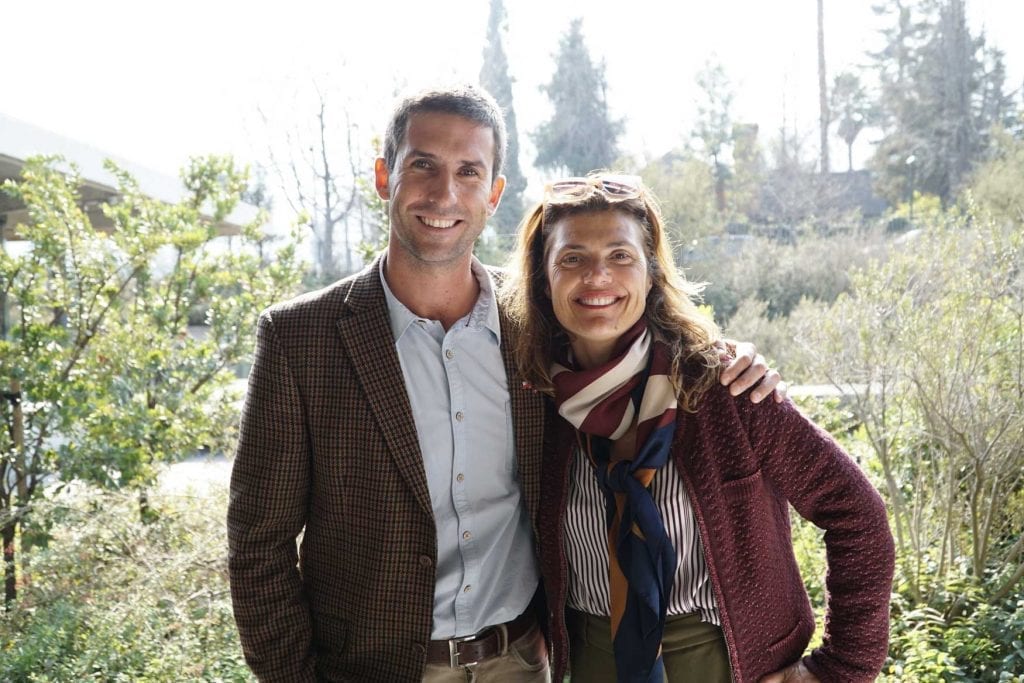 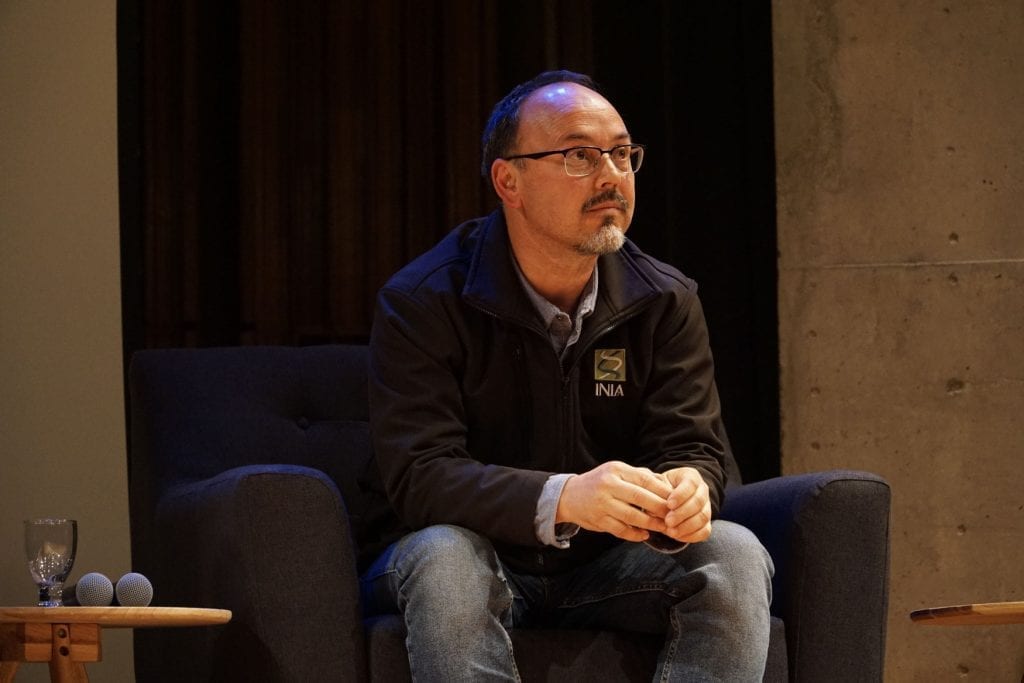 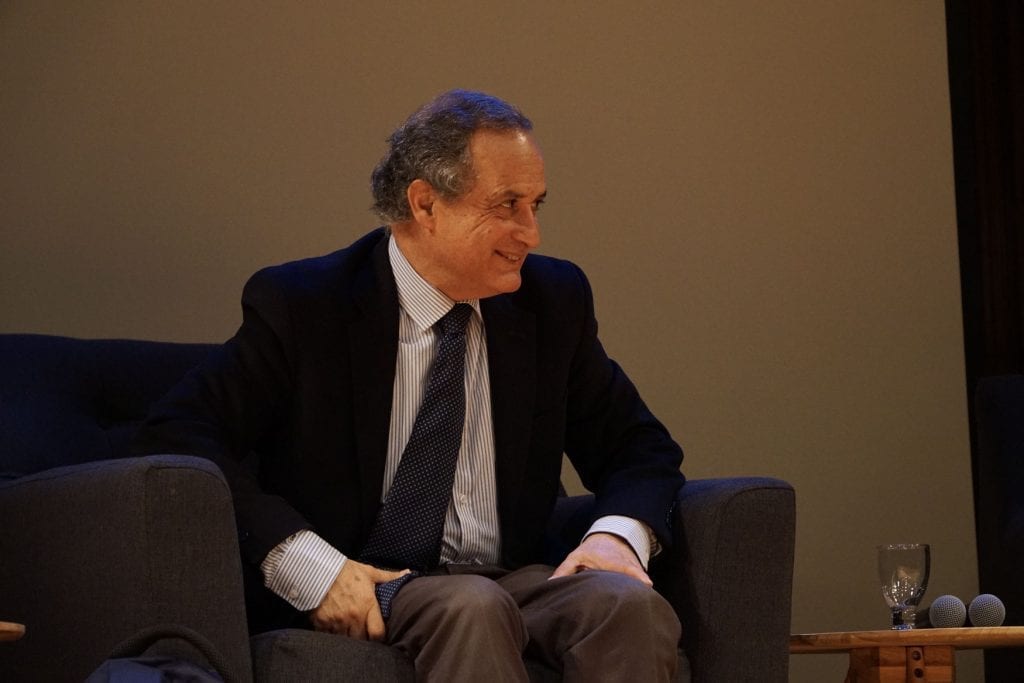 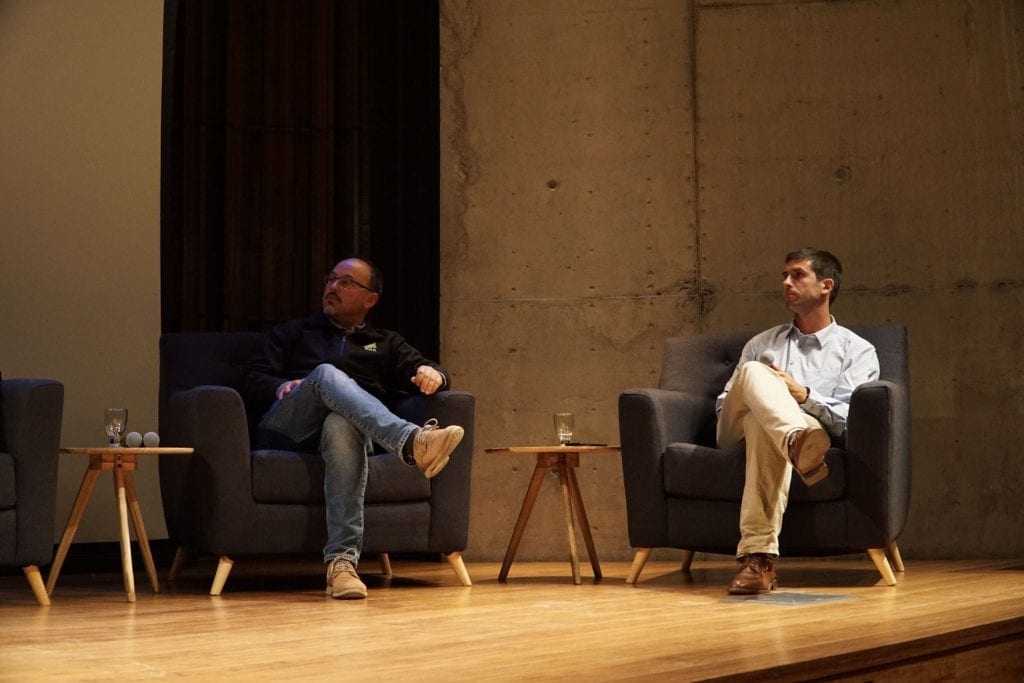 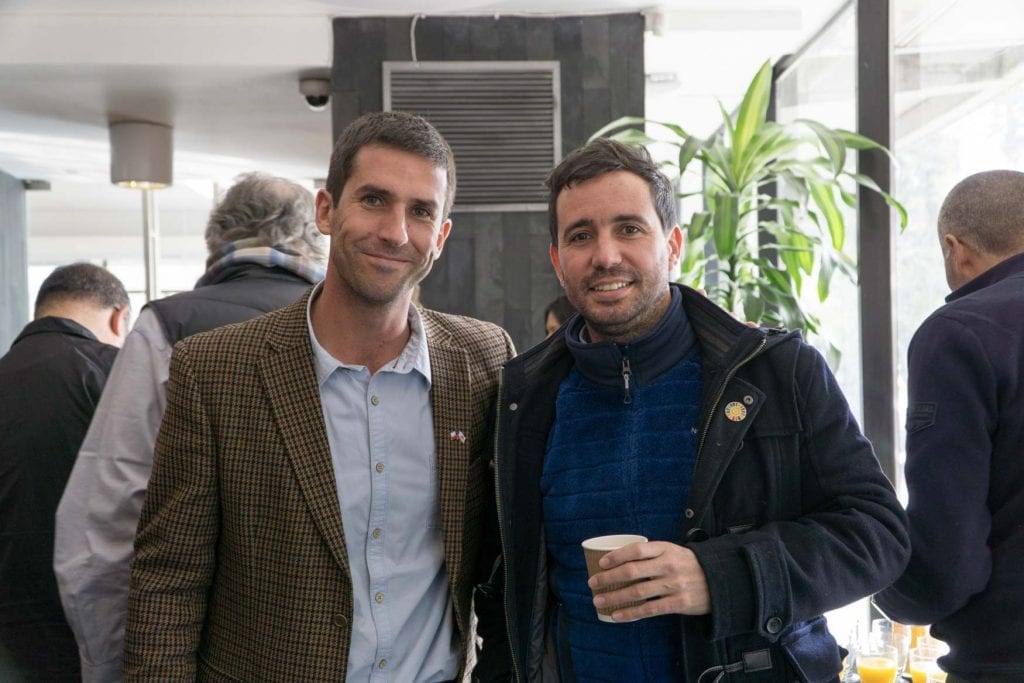 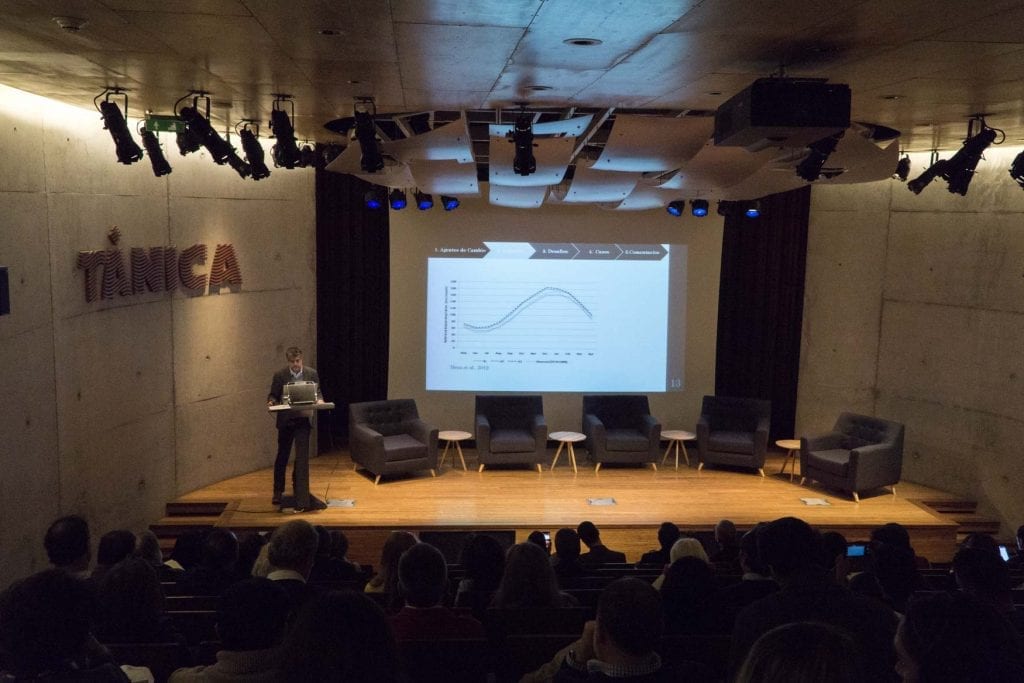 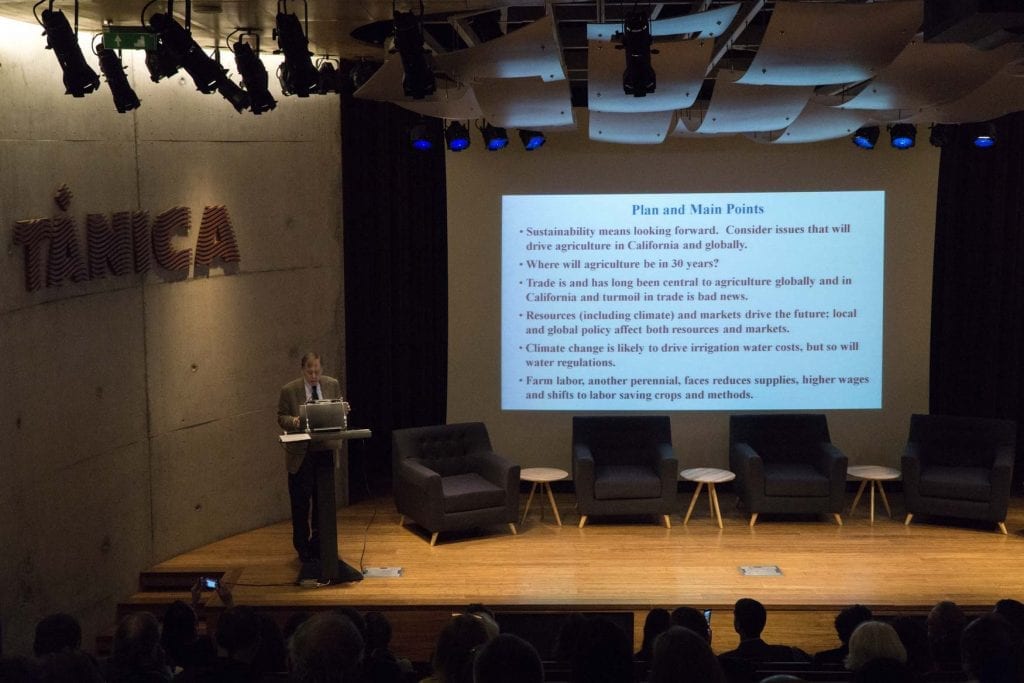 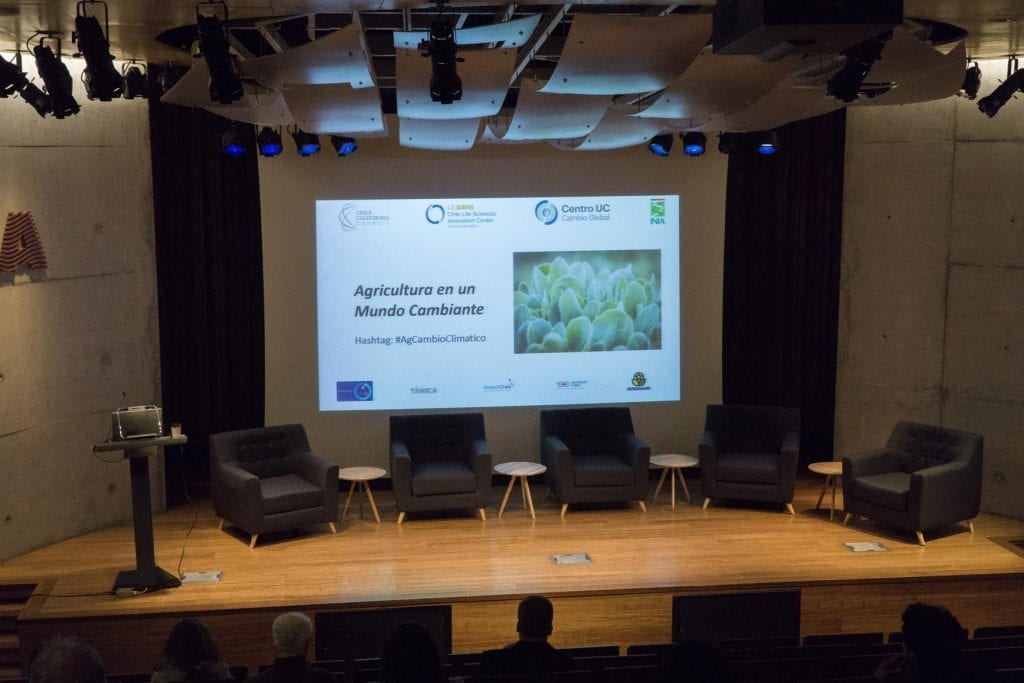 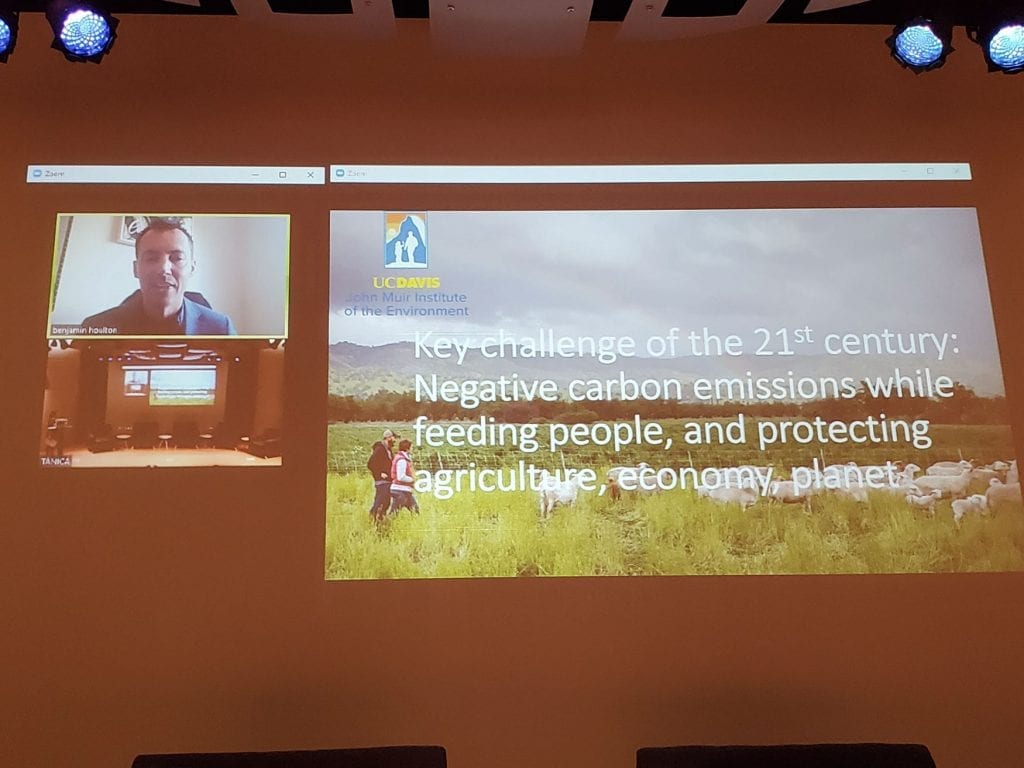 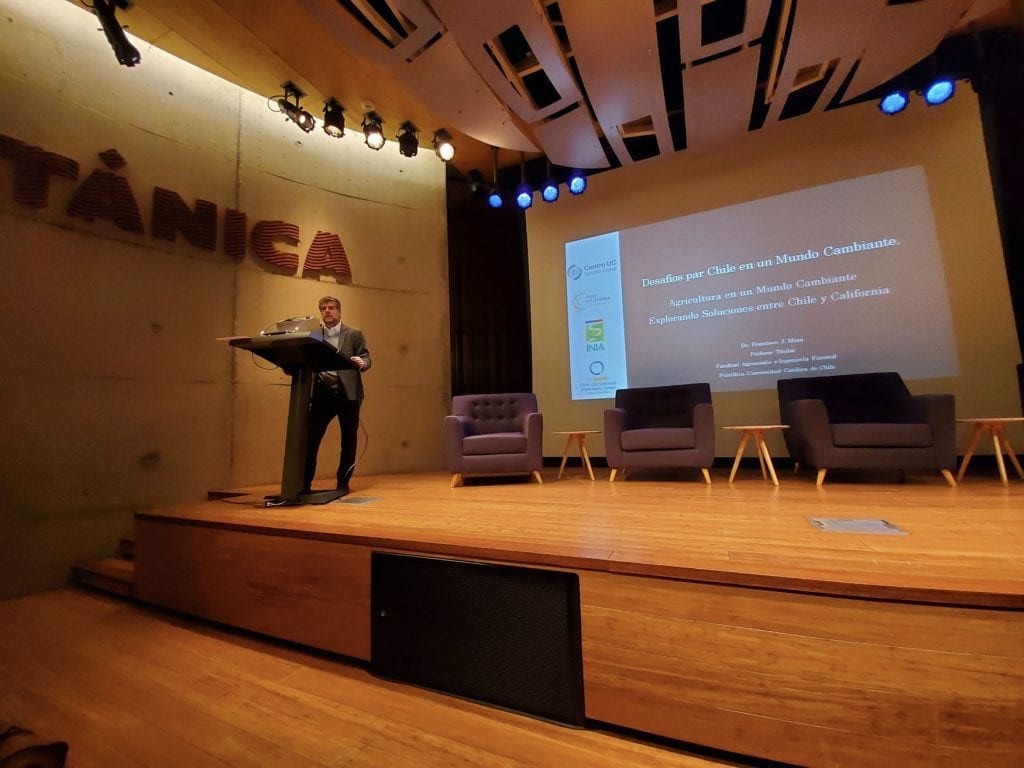